Scots Have Voted! When Will Eelam Tamils Vote!!

The conduct and the outcome of the Scottish referendum for a separate state of Scotland has taught us many lessons. Beyond the outcome, peaceful campaign and management of the referendum are far reaching and is a lesson to be learnt by the pseudo democracies world over.

It is the will of the British parliament to accommodate a peaceful referendum for secession that must praised. The process was handled with mature sense throughout which is praiseworthy. There was no anti-Scot hate feelings let lose in the media or in the campaign. There was no police baton beating, not a bullet or tear gas being fired, there was no white vans or kidnaps or any form of physical violence. Instead all these were translated into responsible political debates and campaigns, paving the way for free and fair voting.

It was a very respectable campaign for a country that manages its affairs with an unwritten constitution. Respect for the views of the aggrieved, common-sense, mutual trust and to face the outcome with the broader shoulder were evident in the entire process of the referendum.

For the Scots, two issues were fundamental. Their Gaelic identity as a nation of people and their desire to govern themselves with their own fiscal strengths, as the heavily centralised financial control by the Westminster was an issue that were elementary to the campaign of the Scottish National Party (SNP).

The British media played a laudatory role to invoke mature debates on the Scottish separation. From the politicians and political pundits to ordinary civilians, all argued their views sensibly. When the first opinion poll gave a point lead to the ‘Yes’ vote, there was a sense of sadness amongst people in the South and it did not any way turn into highhanded anti-Scott/SNP tirades or animosities anywhere.

There was general fear that a ‘Yes’ vote will have serious consequences in political and economic sense for both the divide. The opinion poll in favour of the ‘Yes’ camp sent the initial shock wave through the financial market. If the ‘Yes’ vote had prevailed in the referendum, there would have been serious financial turmoil for the UK economy that could have led to unimaginable consequences.

Whilst I am writing this piece, one thought that overshadowed my thinking was why didn’t the tin-pot leaders of absurd democracies like Sri Lanka did not engage as spectators in the referendum process to understand the way a democracy should function on a very sensitive issue that involved parting of territorial sovereignty of a region.

A referendum of this nature is diabolical  for Sri Lanka and if there is a remote chance of this happening, the nation of Sri Lanka will be soaked in blood and the rabid crusaders will spearhead a campaign of vituperation of unimaginable scale. Without the guarantee of international security, a referendum of this kind cannot happen in Sri Lanka. The very entrenched government machinery would have undermined the effort to make it free and fair.

In the Scottish referendum campaign pro ‘Yes’ campaigners argued their case very well. They made use of the length of time since the announcement of the referendum to undertake a very interactive campaign. Whereas the ‘No’ camp pitched their campaign only lately. SNP leader Alex Salmond said the Scottish referendum is a “once in a generation opportunity” and results showed the demand for separation had grown from 10% thirty years ago to 45% a week ago in the referendum.

Though the Westminster was accused of spreading a fear campaign about the separation, the campaign on the whole was a mature process of claims and counter claims by both the parties.

Scots were promised wide raging devolution to the scale of a federal governance by the Westminster leadership in the campaign. The Labour Party that has major say in Scotland would have been the victim if Scotland had separated as they would have lost sizeable chunk of parliamentarians in the House of Commons. The composition of elected MP’s from Scotland in the 2010 election will confirm the scale of damage for the Labour Party. 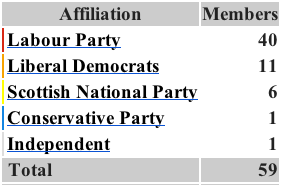 The former Prime Minister Gordon Brown was praised for his mature campaign to influence the voters. Even Prime Minister David Cameron’s emotional appeal to the Scots went very well despite the Tories accounting for one parliamentarian from Scotland.

There is also need to consider a comparative analysis between the demand for referendum by the Scots and their counterparts Tamils in Sri Lanka.

The charter of the UN under article 1 states that: UN is ‘To develop friendly relations among nations based on respect for the principle of equal rights and self-determination of peoples, and to take other appropriate measures to strengthen universal peace’. The Scots wanted this right to be exercised, though they did not suffer physical or mental persecution under Westminster rule. Their right to self determination was progressively recognised to the extent of some decision making powers being devolved to the Holyrood and though symbolic they successively gained recognition to use the Scottish currency notes in par with the British sterling pounds.

Though there is historical parallels between the Scots and the Tamils in Sri Lanka, the Tamils faced heavy handedness of the state of Sri Lanka to exercise their right of self determination. The British, handsomely handed over the exclusive territorial control to Colombo at independence without any regard to the separate sovereignties that existed when it took control of the island. It thought, the adequate safeguards in the Soulbury constitution will progressively transform Sri Lanka into a mature democracy. But all what happened in the post era was the hegemonic crusade of the majority exerting its overall control over all the minorities and Tamils became the primary persecuted race in the country.

If Scots were given the opportunity to exercise their right to self determination, its counterparts – the Tamils in Sri Lanka, have  much greater claim under the same right as there are a systematically persecuted race. The right exercised by the Scots will never materialise  for the Tamils due to the stubborn internal and regional constraints. However, if Tamil politics take a mitigating path to gain federal arrangement within Sri Lanka or to join India, there will be some hope of a referendum with international engagements.

The outcome of the Scottish referendum was a right one and was in the best interest Scots themselves. Business is normal in the United Kingdom following the referendum and the promises of wider devolution to the extent of federal states for the union regions and even to the English towns and villages will be a process from now onwards in the UK, whilst Tamils in the north will be struggling to manage the Northern Provincial government with the excessive outmanoeuvring and skulduggery of the state.

Persecution of the Tamils will continue until they are brought to the subservient standard to a manageable minority.

Butchers Of The Muslims Get Together